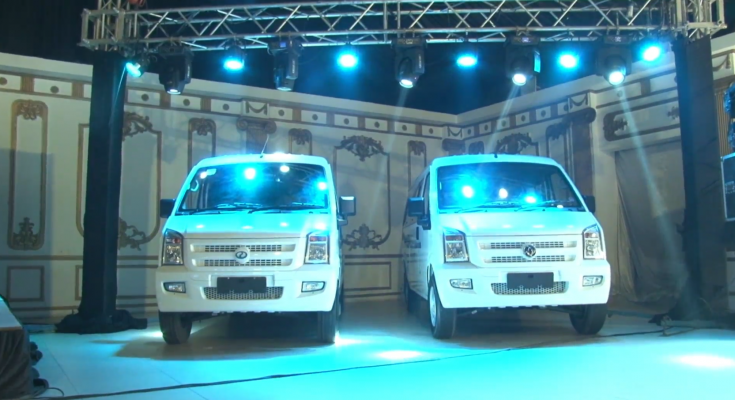 These vehicles have been imported from China by Sitara Engineers Faisalabad and Tesla Industries Islamabad under joint ventures and their assembly will start in Pakistan by next year.

Ahmed Nawaz, director of Sitara Engineers, says they have introduced commercial electric vehicles because their operators know where to pick up and deliver the goods.

He said: ‘The commercial vehicle knows its point, how many kilometers it has to cover, so we decided that if we want to enter the market of electric vehicles, then we have to start with the commercial vehicle so that we can do it. Succeed in two or three more years and then bring a domestic car so that they can be used.

So far, all the electric cars or vehicles being imported into Pakistan fall into the category of domestic vehicles, while the ‘Maximus’ cargo van and the ‘Tourer’ minibus are the first electric vehicles to fall into the commercial category. ۔

In this regard, Ahmad Nawaz said: “These are very low cost and the commercial electric vehicle will cost about three to three and a half rupees per kilometer, adding to the cost and obsolescence.”

“We are offering a local warranty,” he said. One and a half million kilometers or five years to be completed.

The biggest advantage of electric vehicles around the world is the cost savings on petrol and diesel, but their real advantage is that their silencer does not emit any kind of smoke but it has a silencer at the top. Does not exist

In this way, those who buy electric vehicles get rid of petrol or diesel as well as replacement of mobile oil and filters.

It should be noted that the government of Pakistan has announced that at least 30% of the vehicles running in the country will run on electricity by 2030 to reduce the environmental pollution.

Amir Hussain, CEO of Gogo Motors, a subsidiary of Tesla Industry, said that his company had decided to introduce commercial electric vehicles keeping in view the same policy of the government.

Commercial electric vehicles introduced for the first in Pakistan

However, he said: “The government has changed the electric vehicle policy four times in the last four months and last time in the mini-budget the sales tax on electric vehicles has been increased from 5% to 12.5%.”

According to him: ‘The use of commercial electric vehicles will reduce smog and air pollution problems in big cities, but it is important for the government to clear its vision of how soon it wants to introduce electric vehicles in Pakistan. ۔ ‘

The biggest concern of those who want to buy electric vehicles is that even if they buy more expensive electric vehicles than petrol or diesel vehicles, how will it be possible to charge them during long journeys.

Another problem of such consumers is that like petrol, electricity prices are also constantly rising.

In this regard, Amir Hussain says that the price of electricity is still much lower than that of petrol or diesel while solar charging stations can further reduce this cost.

He said that at present his company has the largest charging network for electric vehicles in Pakistan.

Commercial electric vehicles introduced for the in Pakistan

According to Aamir Hussain: “From Peshawar to Rahim Yar Khan you can travel in any electric car. The charging station is in Islamabad, in Peshawar, in Bhairah, in Pindi Bhattian, in Abdul Hakim, in Multan and also in Faisalabad. A charger will be installed in the same month.

“This car is 11-seater and travels 250 km on a single charge with air conditioner and has a maximum range of 300 km while the battery life is close to one million km,” he said.

“The electric car’s capital cost is a bit higher because it includes the cost of the battery, but because of its operating cost, it quickly bridges the gap,” he said.

Citizens participating in the launch of this car were also disturbed by the increase in petrol and diesel prices in Pakistan and their desire was to increase the number of charging stations for electric vehicles so that they could have their own without any worries and anxieties. Be a part of everyday life.