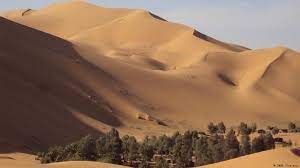 Deserts are spreading how to make the earth habitable? 2022 news

DesertDeserts are spreading how to make the earth habitable? 2022 news. The Gobi Desert in northwestern Mongolia and China is the worlds fastest-growing desert. Its current area is 1.2 million square kilometers, but every year it is expanding to about 6,000 square kilometers.

Discovery of 120,000-year-old human footprints in the desert of Saudi Arabia

Desertification is the process by which fertile land turns into barren sand. Although this process is natural, human beings are also a major factor in its spread and intensity.

There are four main drivers behind this global desertification process. For an industrial agriculture there is excessive use of water, frequent and severe droughts, deforestation and severe use of livestock and livestock pastures.

The fertile and lush areas of the past are now turning into barren and sandy areas and thus the lives of nearly one billion human beings and millions of other species are now in grave danger. It is estimated that by the middle of this century, a quarter of the earth’s surface will be deserted.

What is the solution?

This is a frightening situation, but the good news, according to scientists, is that this situation can be changed. Creating life in the desert through rains can be an extraordinary process in this regard.

Experts have developed a desert agriculture system under the Al-Bada project near the Saudi city of Mecca. Thus the period of rains can be returned to the life of the desert areas.

According to Neil Speckman, a former director and expert at the Al-Bayda Project, Saudi Arabia usually receives a lot of rain in small areas and the result is flooding of civilians, “he said. Instead, it will be a sustainable and long-term way to store water. When there is heavy rain, the earth cannot absorb water and thus a lot of water is lost.

Watch Video 03:00 Solar energy is being stored through glasses

Together with the villagers, agronomists built a rock wall in western Saudi Arabia through dams and terraces. Now when it rains, this water is collected and delivered to where it is needed or where it can be gradually absorbed into the ground. The same method was used in South America centuries ago.

According to experts, due to the presence of groundwater, despite the drought of up to 30 months, plants and trees in the local Saudi areas survived without water.

The use of technology has also been effective in counteracting desertification in North Africa. The largest desert in the world is spreading like the Gobi Desert and in some places it spreads up to 50 km annually. Through solar panels and wind farms, the area is also providing a way to prevent desertification.

Coming to the ground, this cool air brings with it water vapor and thus these water vapors fall on the local area in case of rain. According to experts, if solar panels and wind turbines are installed in one-fifth of the Sahara region, it will cause a total of five centimeters more rain in the region.

Another natural method of preventing desert spread by stopping the desertification process has been used in China and so far it has been very successful. In 1988, the Kobodi Desert spread rapidly in the northwestern part of Beijing, but tree planting was started to protect the transport route through the salt mines. The planting of trees stopped the spread of desert in this area.