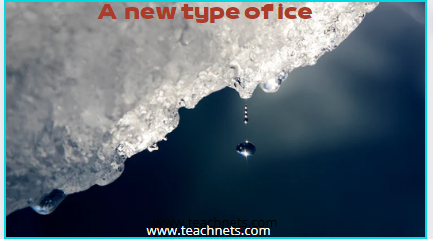 Discover a new type of ice. Water is an essential component of the survival of life on Earth and it covers 71% of the Earth’s surface but it exists in more forms than we think.

Scientists have now discovered a new type of ice that they believe exists in the Earth’s mantle, and that may have been found in distant water planets. So far, 20 types of solid ice have been discovered on Earth.

This research could give researchers clues as to what form water would be on other planets where the temperature and pressure differ from Earth’s.

The discovery was made by a team of scientists at the University of Nevada in Las Vegas after inventing a new method of measuring the properties of water under high pressure.

The water sample was pressed between the tips of the first two diamonds. Which formed into several ice crystals. The ice was then heated by laser heating, which temporarily melted and re-frozen to form fine crystalline rows.