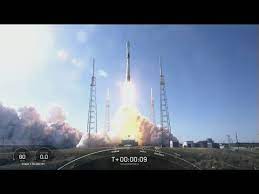 The second good launch of SpaceX in 2022

The second good launch of SpaceX

NASA Space Flight confirmed that in this third transporter mission, 105 microsatellites and nano-satellites of commercial and government circles were launched at an altitude of 525 km.
The Falcon 9’s first stage booster is the 10th booster to land safely.p

Elon Musk, owner of SpaceX, has not yet commented on the successful launch, but has retweeted SpaceX launch footage.
The second-stage rocket flew for 55 minutes off the coast of Florida before entering the final orbit, where it launched 105 satellites.

The launch of the satellite was carried out with the utmost care to ensure that the satellites did not collide with each other.
The second stage spacecraft will also be retrieved upon return to Earth.
Meanwhile, the 162-foot-long booster, which separated from the second-stage spacecraft just 10 minutes after takeoff, landed at SpaceX Landing Zone 1 in Florida.
The landing resulted in strong waves that shook the windows of locals’ homes.
The locals had already been informed about the sonic waves caused by the landslide.